I have it. You've probably got it. This is hard reading, but worth it.

(Don't be put off by the illustration on the button.)

The Coyote posted this at Dreamwidth. You can comment here or join the

others who have howled back there. (You don't even have to have an account -- you can use your LJ or Open_ID.)

Thing the First:
Re: Facebook/Twitter integration -- I keep my LJ separate from my facebook/twitter accounts. I know I'm connected to some of you over there and over here, but over there is also a place where I'm connected to my parents, and I use this space as a "safe" space, where I can rant about my family to my heart's content if I need to.

So, even if you're tempted, please don't. Not that I think any of you would actually be tempted.

Nor -- as should be clear from the above -- will I be integrating my LJ and FB/twitter. Therefore, I will not be cross-posting from anyone else's journal, either. Not that I would in the first place.

I'd rather not move to Dreamwidth, as I'm a permanent account holder and most of you are here, but I do have a dreamwidth account and I'm in the process of mirroring this account over there. I'll figure out how I'm going to integrate the two later.

cloudscudding wrote:
I just launched "The Circus of Brass and Bone", an apocalyptic steampunk serial story and podcast that follows a circus traveling through the collapse of civilization.

I'm doing this to raise money for my mother's cancer treatment--she was diagnosed with Stage3c ovarian and endometrial cancer while working at a school in India, so she doesn't have health insurance. Coming back to the United States for treatment means both my parents had to give up their jobs,too. And because of their choice of careers--helping others--they don't have much in the way of savings to fall back on.

All donations go to pay for my mother's cancer treatment and related costs.

So, in order to signalboost, I'm reposting this with permission. I haven't dug in to The Circus very far myself (being as I'm at work, I can't, really), but I know there are several people on my friends' list for whom this is Relevant to their Interests.

And Jim's good people, and as far as I've been able to tell, his friends are generally good people, so there's that, too.

I have to say...the first page intrigued me. Also, felt oddly familiar.

Because it's been a while, and my stress levels are currently off the charts, and on the philosophy why the hell not:

Following are twenty-five first lines from songs as they came up on my MP3 player, with the exception of three whose first lines would have given away the titles. Have fun identifying them:

Adding a note: Several of these are kind of odd, many of them are album-only tracks, most of them are from the 80s and 00s but there are a handful of 70s tunes in there as well. There are at least two that I don't expect anyone to get, and one that was written (though not performed) by Shel Silverstein.

Some time, I'm going to do a 25 last lines of songs, or maybe movies. I dunno. One or the other.

As I was driving in to work today. Lovely example of the breed.

And, of course, I had no camera.

This is several different kinds of awesome. Link to Bad Astronomy, with pictures of Saturn's moon Mimas.

Now I want to watch Cast a Deadly Spell again.

But Netflix doesn't have it.

In July of 2001, my parents adopted a dog after the vet told them not to get attached (that's Lucky as he appeared 10 days after they adopted him on the top left, and wow, freeservers. That's a hell of a flashback). 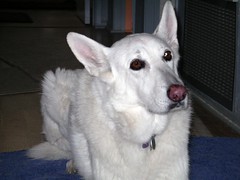 He was confused by life, often. 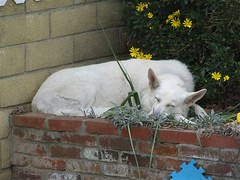 He was in ur garden, snorflin the flowers.

He was also a pureblooded white shepherd. With that, unfortunately, came hip displacia. He'd been doing well enough on medication with TLC to make sure he didn't hurt himself. Yesterday, however, my father noticed that he was having trouble getting water from his dish. And he didn't eat (and this is a dog that, once he came to my parents, never missed a meal for any reason).

And then he tripped on their girl dog, and fell, and couldn't get back to his feet again.*

I'm sad. I will miss him when I go home. My parents are devastated.


* I am sad. But this is so typical of Lucky; he went out of their life much the same way he came in: clumsily.

Saw this and thought of you...